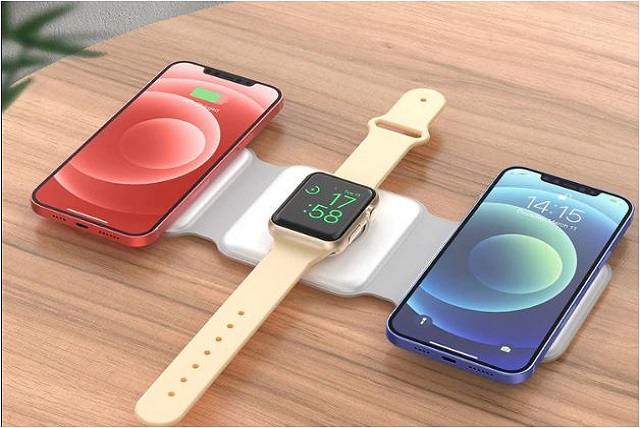 You might have seen a rapid technological change in the past few years, regularly introducing new advancements. This change is highly noticeable in digital devices, including portable machines such as smartphones, earphones, smartwatches, etc. Their functionality upgraded, sizes got compact, and the way of charging also changed.

Let’s talk more about charging, as energy drives digital devices to operate, and without it, they are just pieces of silicon and plastic. But how did charging transform from conventional methods to a new wireless mechanism? We need to look at this technological evolution and how it makes charging more convenient for everyone. If you are looking for foldable wireless chargers in Ottawa or Toronto, you might be interested in learning more about this exceptional technology.

We all have been using those wired chargers to juice our digital devices, smartphones, smartwatches, earbuds, and everything that is portable and runs on electricity. There was no other option but to carry a separate wired charger for each device, making things inconvenient.  But for the past few years, everything has been going wireless, including charging solutions.

Going cordless frees you from the hassle of cable management; you don’t need to carry a separate charger and cord to power up your portable devices. With wireless charging, you only need to ensure your devices are induction-enabled, and all of them can be charged in one place. It is all possible because of the core technology called Qi Standard, capable of providing 5-15 watts of power to all the supported devices.

Inductive or wireless charging has also been going under advancements, and now cordless chargers are faster and come in many different variants. The most popular is the three-in-one foldable charger that can charge up to three devices simultaneously and be folded to fit in the pocket. You can go online and easily find a foldable wireless charger in Ottawa and Toronto at any given minute.

How Does it Work

What makes wireless charging the center of attention is its capability to charge up a device without an exposed electric surface. It contains an electromagnetic coil in the base that creates a magnetic field when the AC electricity passes through it. This magnetic field keeps on fluctuating as the amplitude of the electric current is also fluctuating. It ultimately creates an alternating electric current in the device’s induction coil, which gets converted into a direct current by a rectifier, thus charging the battery.

One Charger, Many Benefits

The introduction of wireless charging was motivated by creating a convenient alternative to inconvenient wired charging. Yes, you read it right, inconvenient. Not every smartphone and the accessory manufacturer makes universal standard charging cords for electric devices. There are varieties in such devices; one’s charger might not work with other devices or even fit. But it’s not the case with wireless charging technology. Let us explain:

The concluding point would be that while being relatively new, wireless charging is undoubtedly the future of portable devices in Canada and the rest of the world. You may see people still using conventional chargers to power up their devices, but at the same time, the rising popularity of induction charging is also reaching new heights.

Steps to Buy the Best Edge Combs in 2021

Federal Employee Retirement Planning Challenges and How to Overcome it?

Why is It Important to Seek The Guidance of a Business Coach?

7 Wonderful Reasons to Give a Try to Reusable Bag

Michael Brown - September 28, 2021 0
Using less natural resources and produce less amount of plastic waste is the responsibility of everyone, whether it is big corporates or a common...

Precautions to Be Taken While Buying Used Toyota Engine Parts

The Benefits of Dental Implants

Annie johnson - June 20, 2022 0
Despite advances in dental treatment, millions of people still lose teeth, most of which are caused by periodontal disease, tooth decay, or accident. Bridges...